Kedarnath is as mystical as it sounds. It is not just a trek but a journey of you to yourself. It is one of the 4 pilgrimage sites of ‘The Char Dham’. Kedar means’ fields’ and nath means ‘lord’, and hence, Kedarnath translates to the “Lord of the fields or land” that is Lord Shiva.

The different aspects of Shiva have manifested themselves in many different forms across the country. One of these is the Temple of Kedarnath. The divine lingas are spread from Kedarnath in Uttarakhand in the extreme North to Rameshwaram in the Extreme South. A jyotilinga is said to be of divine origin, with each linga with its own unique legend of creation. If you are interested in the myths and tales of Kedarnath, Keep on reading, my friend!

The Unique Legend of Creation of Kedarnath In the Rudrapryag district of Uttarakhandl, Kedarnath is one of the most revered pilgrimage spots in the country. It has its roots in ancient times. It is said to have been visited by the Pandavas several times. After their victory over the Kauravas at Kurukshetra, the Pandavas attempted to atone for the sin of fratricide by worshipping Lord Shiva at Kashi. He remained elusive and persistent. Shiva left Kashi to test their devotion and appeared in the guise of a bull. Bhima recognized him and tried to chase him, but Shiva dived into the earth and vanished, leaving only the hump of the bull, which is, till today, worshipped in the form of a linga. The other parts landed in different directions, the face falling at Rudranath, his belly at Madmaheshwar, his locks at Kalpeshwara and his arms at Tunganath. All these five shrines, the holiest of which is Kedarnath, are collectively known as Panch-Kedar. It is here that Parvati worshipped Lord Shiva to unite with him in the form of Ardhanarishwara. Another legend recounts how the two incarnations of Vishnu, Nar and Narayana, worshipped Shiva at Badrikashramam and pleaded with Shiva to take up a permanent abode at Kedarnath, in the form of a jyotirlinga. It is also said to be where ADR Shankaracharya was last seen before he went into the forest, never to return. (Source: The Book of Shiva, Namita Gokhle) 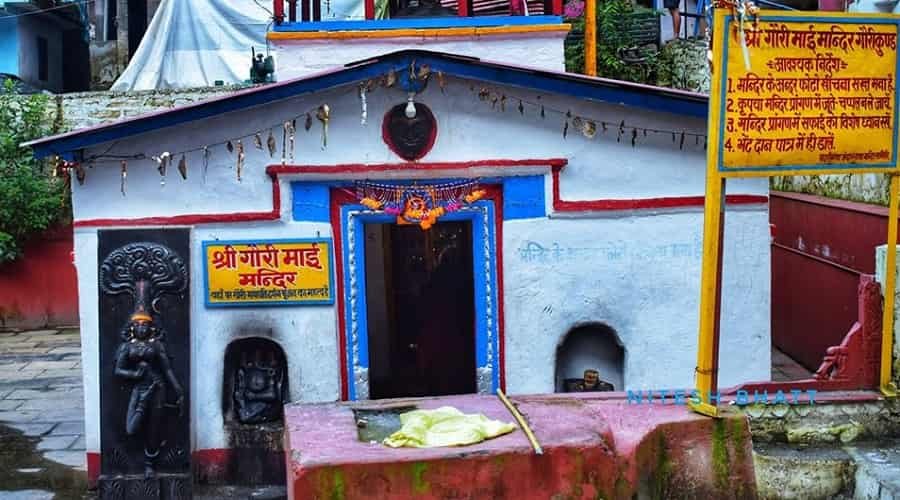 Once you reach the mesmerizing region known as Gauri Kund, don’t forget to take in the sights. As the name suggests, Gauri Kund is famous for its natural thermal springs. As the legend has it, this is also the place where Goddess Parvati meditated to fulfil her wish to marry Lord Shiva. There is also an ancient Gauri Devi temple here, honouring the goddess. Half Kilometre from Gauri Kund is the Temple of Sirkata (headless) Ganesha. According to the Skanda Purana, this was the place where Shiva beheaded Ganesha and then attached the head of an elephant on his headless body. The Trek to Kedarnath is 14 KM long, but the journey is one you would wish to take again and again. Kedarnath Trek is one of the few Trek’s where the journey is equally beautiful as the destination. I might not have been here writing this article if my friends wouldn’t have brought them back with me. I absolutely fell in love with the journey to Kedarnath and plan to go again every year.

The Trek is arduous, no doubt, but I promise once you reach the Temple, it’s almost like the air around you is vibrating with the mantra, “Om Namah Shivaay “, and you feel a calmness settle over you, unlike anything you’ve experienced before.

Shiva worshippers who physically aren’t fit enough to Trek the whole way, for services like ponies, palanquins, and even helicopter services are available to support them in their yatra.

Once you reach the Temple and have settled, you can visit:

1.    Chorabari Tal, also known as Gandhi Sarovar, is a beautiful pristine lake that can be reached by undertaking a small trek of 4 KM. The journey to Chorabari Tal is quite picturesque and takes you through a cute yet dangerous waterfall.

2.    Vasuki Tal is almost 8 KM from the town of Kedarnath. The clear water of the tal reflects the moods of the sky quite indescribably.

3.    Bhairavnath Temple: This temple is a measly 500 m away from the main temple and is the most visited destination after the main temple. It is believed that Bhairava is the first Gana of Lord Shiva and the protector of Kedarnath Temple and valley especially during the time the valley is closed.

4.    Kedarnath Gufa also known as the Rudra Meditation cave has become quite the hotspot since our Prime Minister Narendra Modi meditated in the cave. It is at a distance of 1.5 KM from the Kedarnath Temple and is a a part of the Garhwal Mandal Vikas Nigam’s Guest houses chain.It is a serene place preferred for spiritual practices. Oh! I forgot to mention that the cave is underground too.

The journey to Kedarnath introduces you to a spiritual experience that is beyond this world, this universe. You will find yourself lost in the aesthetic of the region.